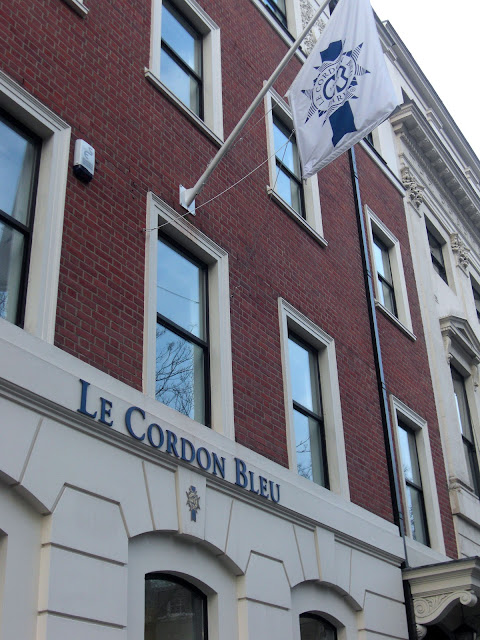 Neither my Japanese family or Mr. Husband's Russian family has a custom to grill a whole poultry on Christmas or any festive occasions.
So I never had opportunity to learn it.

Got a chance to attend Christmas Dinner Workshop at Le Cordon Bleu London.

In the 7-hour course with 8 attendees including myself, we underwent an intense cooking to complete a Christmas dinner course menu under the detailed guide and supervision of the chef, Neil Armstrong.

In addition, his assistant and other two staffs supported all procedures to make the busy schedule smooth and efficient.

The chef made the following dishes:

First, each attendee was provided a 5 Kg-geese to season with salt, pepper and lemon zest. A thick V-shaped wishbone and the fat around it were removed 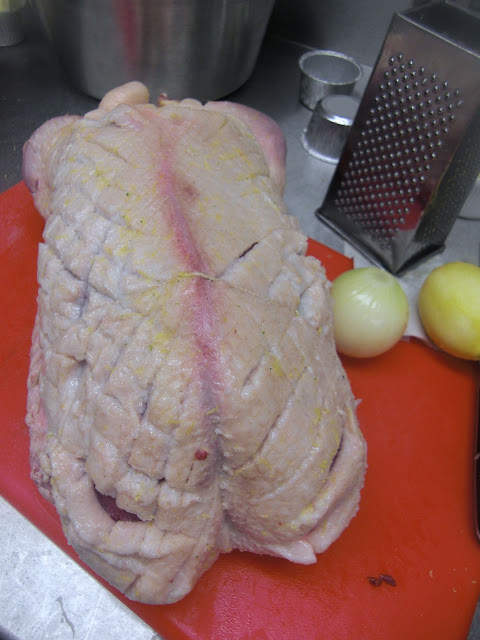 Inside, a lemon, an onion and some herbs were stuffed then the portion was bound with a string to close the bottom with the skin 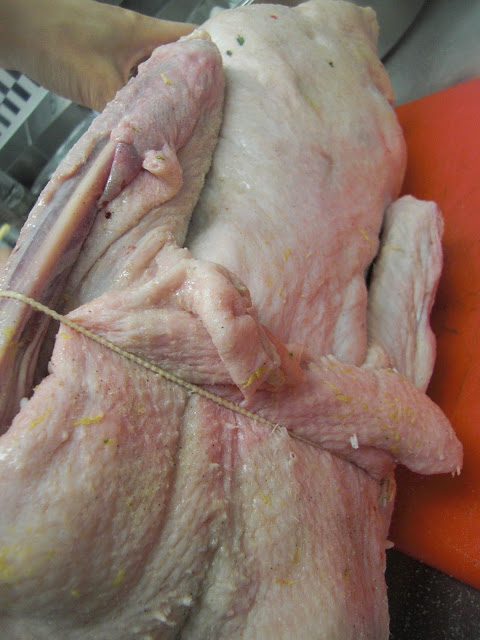 The goose was pan fried over the surface 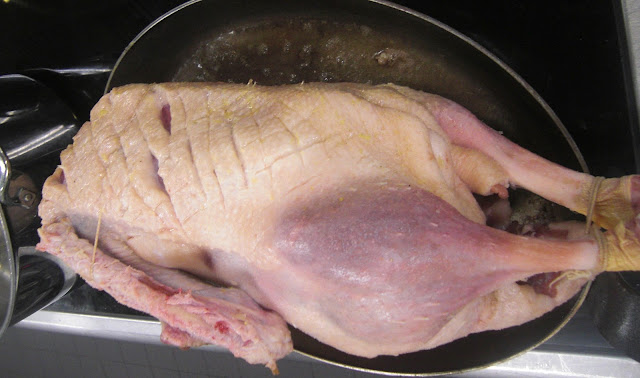 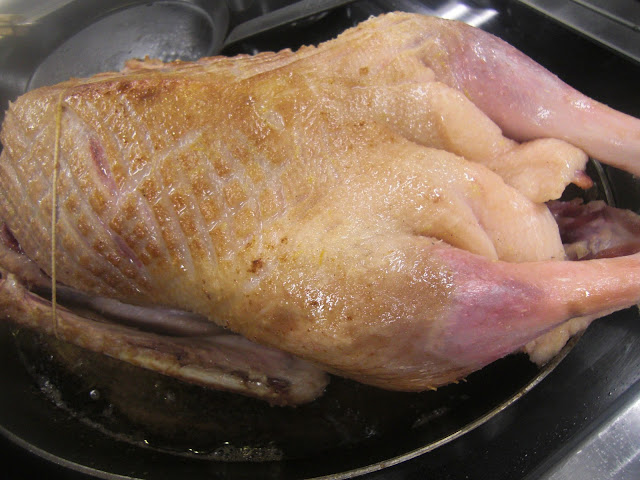 After pan-fried, it was placed underneath of wishbone and giblets that was came with the portion in a deep oven tray. It was grilled in the oven for 30 mins over 200C 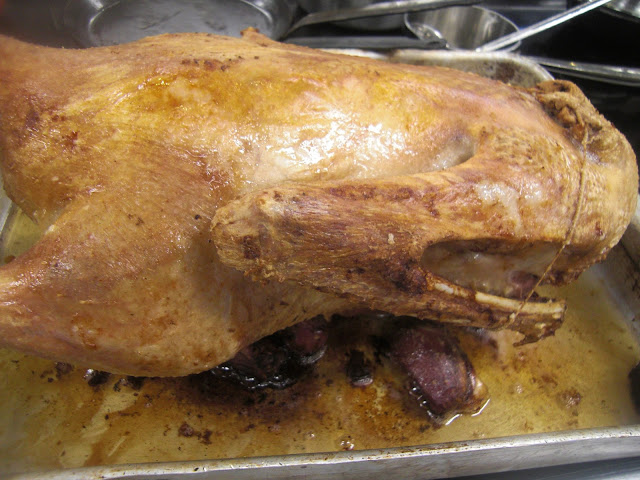 Take the goose out from the oven then drain the fat from the tray. Put the goose back in the tray, fill some water and grill another 1 hour over 170 C. 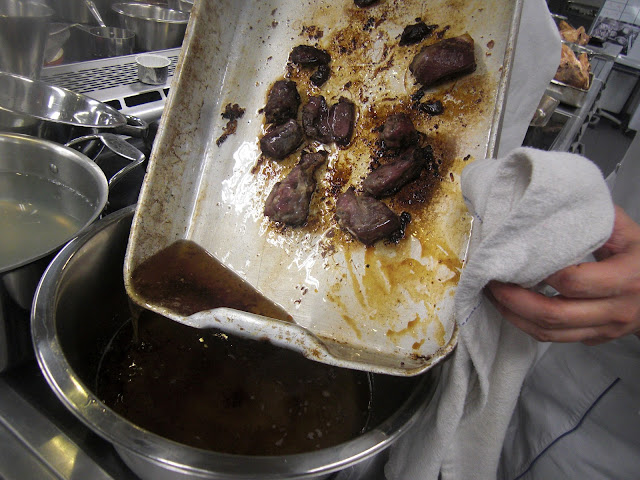 Once the goose is done, put the bird and giblets aside. Degrease the tray then add Madeira and chicken stock.
Scrape the burnt on the bottom of the tray with spoon then put them into a pan 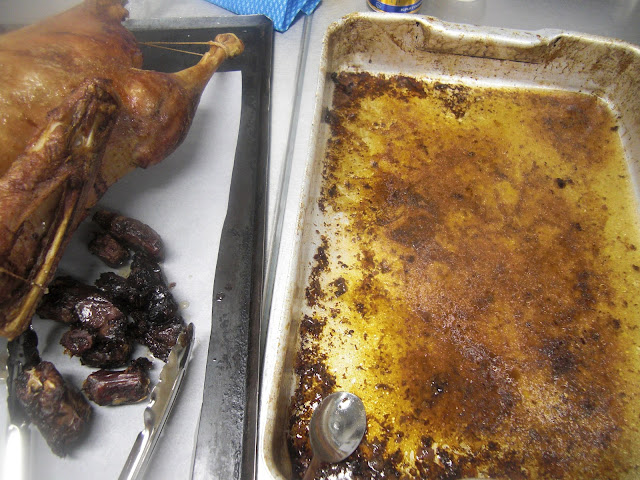 Put giblets and wishbone into the pan and simmer gently. Then strain and reduce to a coating consistency while skimming the oil on the surface 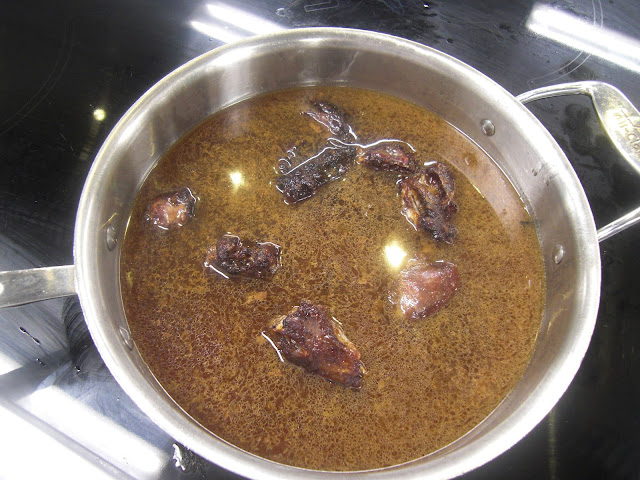 Chopped liver from the goose, chestnut, minced pork, shredded apple, bread crumb and all spice were combined and the stuff was rolled up with Serrano ham placed over the baking sheet and foil. Twisted the end of the foil and it was grilled for 1 hour 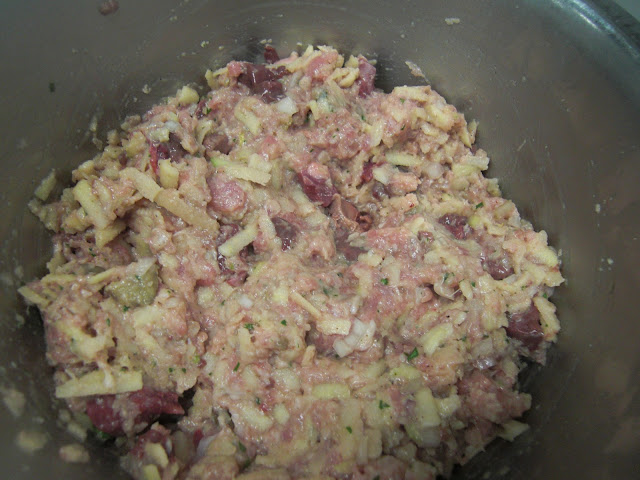 This was beautiful!!
Star anise, cinnamon stick, sugar were cooked in water with a tea-bag then plum without stone were added.
Then it was cooked to condense like jam 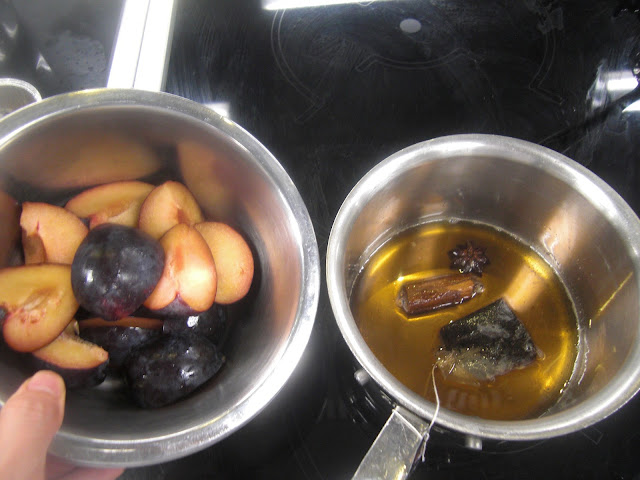 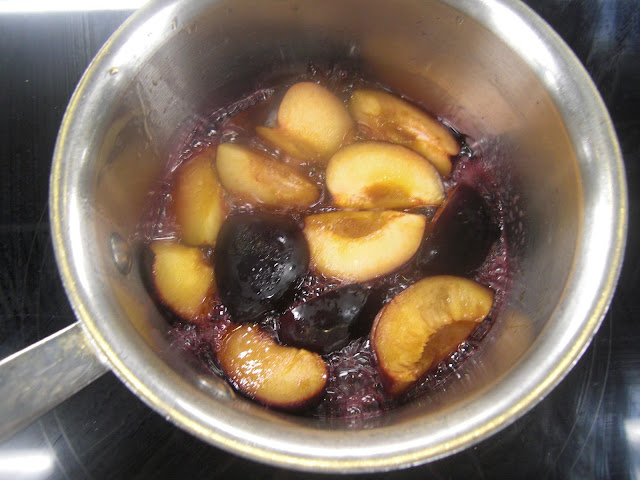 I returned home with huge bags from the school.
Mr. Husband was scared with the bird as double sized as his head 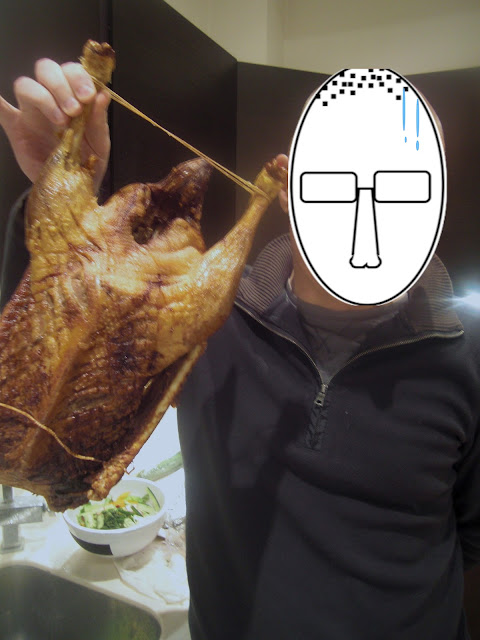 As following the Chef's guide, I taught him how to curve the bird.
He bravely and beautifully did the job!! 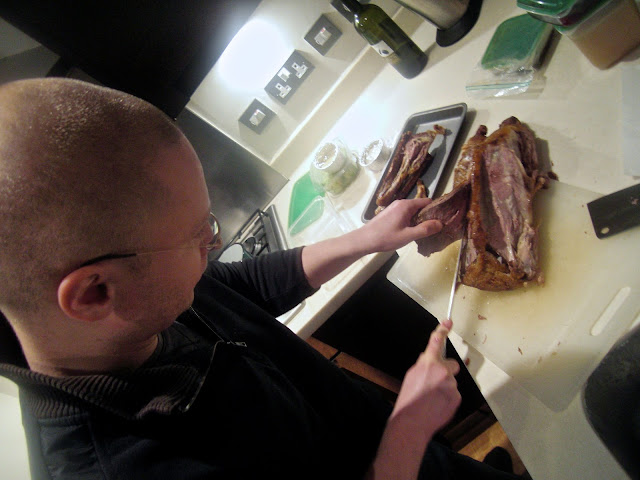 Applied the plum sauce over goose pieces and Pork&Chestnut Ballotine, then I grilled them for 4-5 mins to colour and warm up 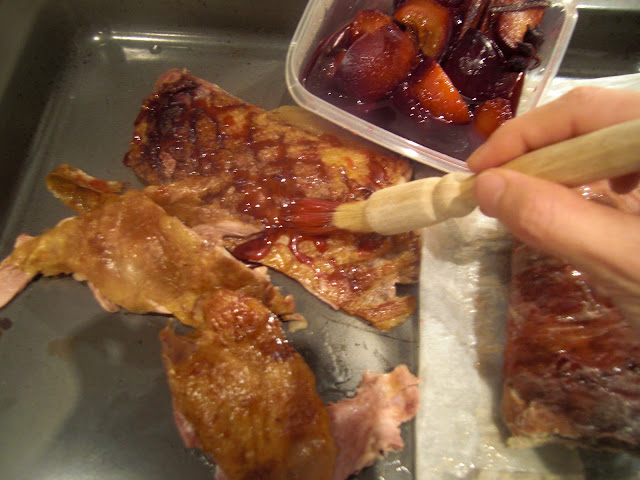 We fused geese fat gained from the very first process with rosemary and garlic.
The perfumed oil was applied to the potato (also prepared at the class) and grilled for 3-4 mins 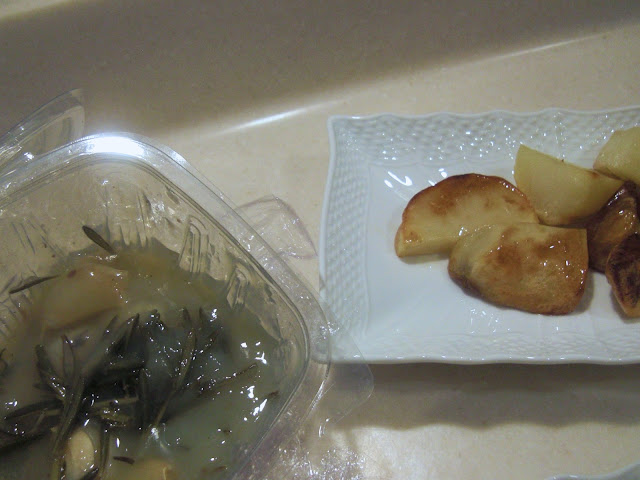 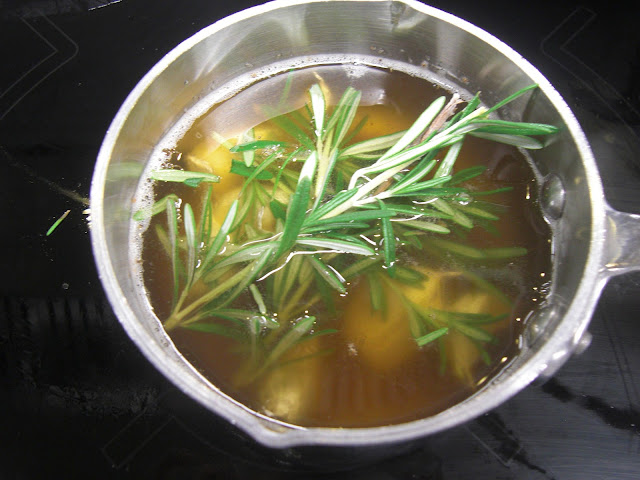 At the class, we grilled parsnip pieces and caramelised them with cinnamon and honey 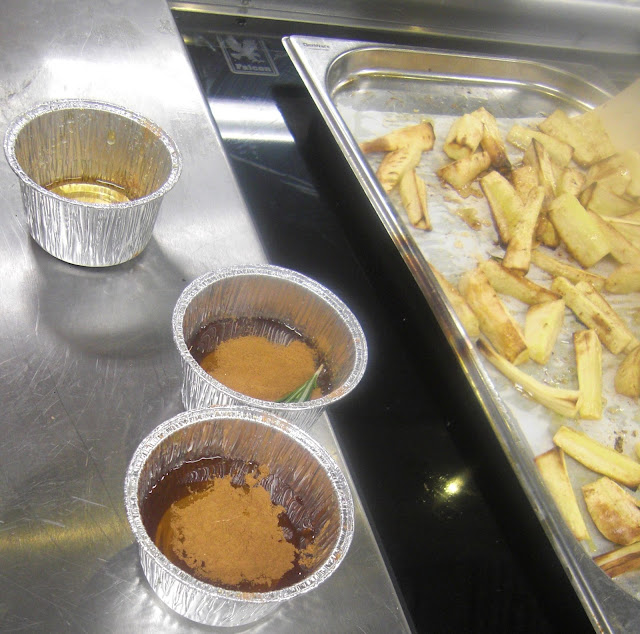 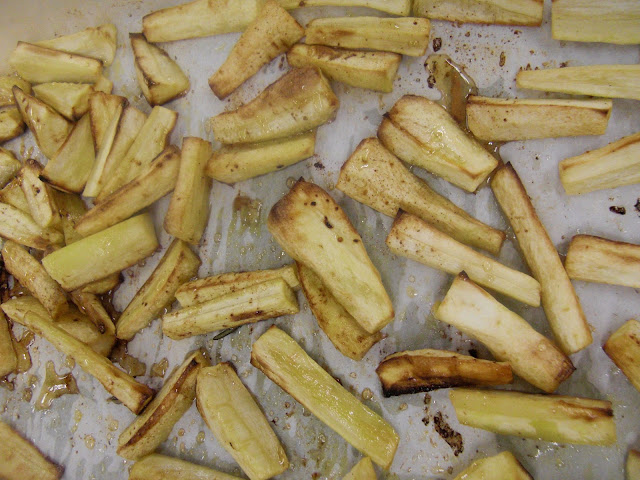 After 10 hours struggle (7 hours cooking at the class+2 hours preparation at home and 1 hour travelling),
finally,
Christmas has arrived to our table!!! 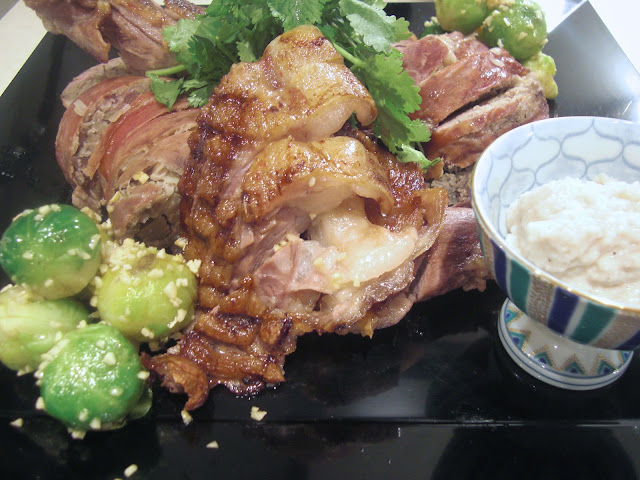 As carefully prepared with right directions,
all dishes were very tasty and also elegant!! 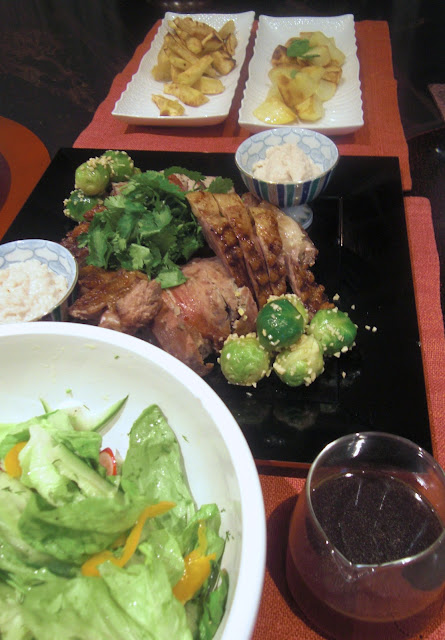 It was correct that I have brought a Red Bull to charge my battery at lunch time.
The course was very intense and busy and required an extra energy to sustain my concentration.

Meanwhile, I was very impressed with the entire staffs' enthusiasm for cooking and the care for the ingredients and the people who cook them.
Also the entire facility is modern.

Le Cordon Bleu is a great school!
It was such a great day and the experience will definitely be beneficial for the rest of my life!!

Time to prepare: 7-9 hours (might take much longer without the efficient supports from assistants at the school)
Total cost including all ingredients and tuition fee +goody bag: 225 pounds

I'll introduce other dishes and the leftover remaking dishes...